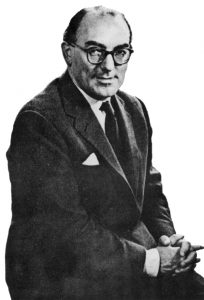 SINCE A.B.C. Television started its operation in the Midlands early in 1956, we have used these Alpha Studios and all its facilities to the maximum every weekend.

From these studios we have presented many programmes on the national network as well as on our Midland channel — programmes ranging from variety to the teenage youth club programme ‘Sunday Break’ which was first produced here, and many of the Saturday afternoon serials, religious discussion programmes, musicals and new talent shows like ‘Bid for Fame’. Currently we are presenting from these studios amongst other programmes, the quiz show “For Love or Money” and with A.T.V., the biggest networking operation in this country, “Let’s Go”, in fact everything from a simple Epilogue to an elaborate play has been, and will continue to be produced in these compact studios.

Alpha enjoys a reputation for being the busiest studio of its size in the country, and the skill, enthusiasm and determination of all its staff is equal to that of any television studio in the world.

We of A.B.C. Television are proud to be part of the Alpha Television Studios.